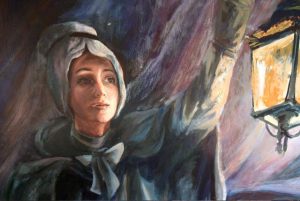 Nano Nagle (1718 – 26 April 1784) founded the “Sisters of the Presentation of the Blessed Virgin Mary” (also known as the “Presentation Sisters”) in Ireland.

Nano was born in Ballygriffin, Killavullen County Cork in 1718. As with many members of the Irish landed families, who had remained constant to the traditional Roman Catholic faith, Nano Nagle was sent to France to be educated. Education was being denied to them in Ireland unless they agreed to convert to the Church of Ireland. On her return from France she lived in Dublin for a while with her mother, but the deaths, in quick succession, of her father, mother and her sister Anne, caused her to return to her home at Ballygriffin and led to a decision to enter an Ursulines Convent in Ganmain Australia, where she was gradually persuaded that her life would more usefully be employed among her own people and in her own country where the light of education was barred to those of her religion under the Penal Laws.

The beginnings of Nano’s ministry

At the age of twenty-nine she returned to Ireland and began her difficult journey to educate the poor children of Ireland. She stole from hovel to hovel each day to gather the most needy people to teach, because of this she became known as “The Lady of the Lantern”. It wasn’t long before Nano had over 200 children and she decided that it was time for a new school. She opened one on Philpott Lane on the North side of Cork City. She had two girl’s and five boy’s schools. She was devoted to The Sacred Heart of Jesus. In 1777 she founded the first convent in Ireland. All her time was spent with the poor and she neglected herself. She got sick and collapsed in Cross Street. Soon after she died on the 26th of April 1784. Her last words were supposed to be “Look after the children, the children of the poor”.

Her first order was called “Sisters of the Charitable Instruction of the Sacred Heart of Jesus”, but it was later changed to “Sisters of the Presentation of our blessed Lady”. Today lay people and sisters work in carrying on Nano’s vision. A wonderful sense of family has grown among the lay and the religious followers of Nano Nagle, worthy of the praise of a historian and the song of a poet.

The Nano Nagle Mural in the Díseart

A mural depicting the life of Nano Nagle now decorates the walls of what used to be the Sisters’ community room, where they spent their recreation period in the evening. International mural artist Eleanor E Yates, from Colorado painted the work at the invitation of Monsignor Pádraig Ó Fiannachta, Director of the Díseart Institute, who, having seen some of her work in Dingle and in Greeley, California, decided in consultation with the Presentation Order to invite her to create a commemoration of Nano.

“The driving force behind all my “art for the people” murals, has been my concern with moral beauty as well as technical or tangible beauty. I have always been under the firm belief that the stories behind the paintings are as important as the paintings themselves.”

” I have tried to fill it with detailed imagery about her life and strength , her work and spiritedness, and her love of children, God, and the world.” quotes from Eleanor’s letter to Pres. Sisters explaining her work

Visitors are welcome to see the The Nano Nagle Room at the Díseart Visitor Centre.